We Made The World's Best Pancakes

We Made The World’s Best Pancakes 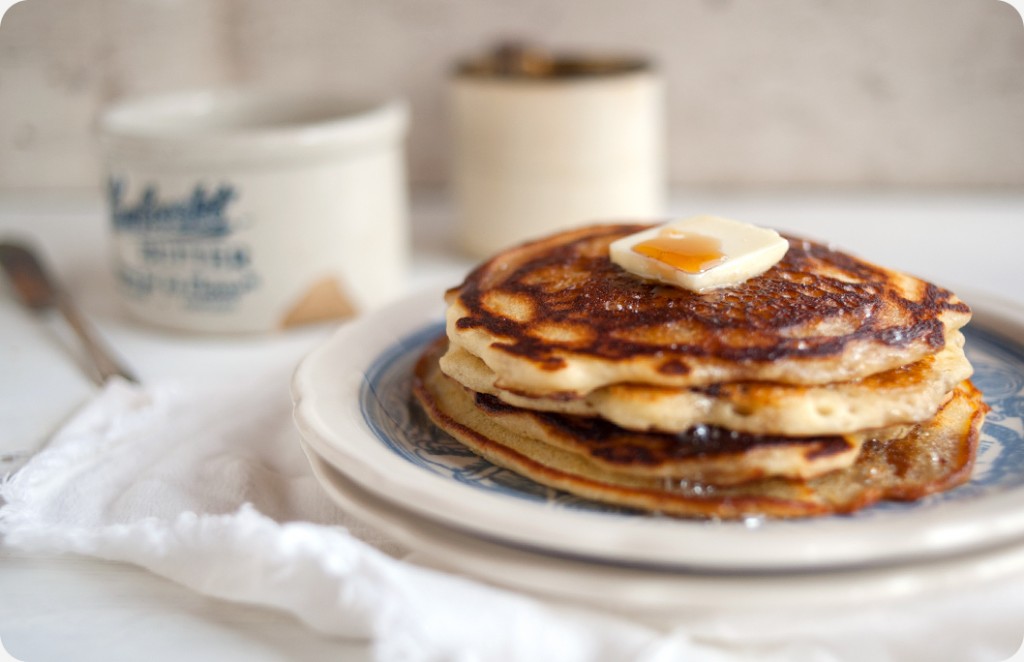 Izzie picked up her pencil and paper and regarded both with great seriousness. At 8, she was small for her age and her thick glasses threatened to swallow her round little face. She faced her aunt over the tiny cafe table in the corner of her aunt’s tiny, yet stylish, apartment. Her aunt was tall and thin and still largely a mystery to Izzie, who had only been living with her a short time.

Izzie faced the butterflies in her stomach and read the first question on the page. “What is the best part of being a grown-up today?” It was an assignment for school. Izzie did very well in school.

Her aunt sipped her espresso and tapped against the table. After a moment, she met Izzie’s eyes. “Guess.”

Izzie frowned. The paper did not indicate that Izzie should guess- it told her to ask a grown-up these questions and write down the answers.

An interview. Perhaps her aunt didn’t know what an interview was.

Izzie might’ve wondered such things aloud to her mother. But her mother was no longer there. And though her aunt always answered her when Izzie mused aloud (which was often), her aunt’s answers tended to be more… peculiar. Izzie sighed and tried to think. The best part about being a grown-up… “You can wear nice clothes?” she asked hopefully.

Her aunt raised an eyebrow. “No. Not that.”

Feeling a bit flushed, like she had said the wrong thing (but her aunt dressed so fancy! And she seemed to delight in her clothes!) Izzie tried again. “You can vote?”

Izzie guessed several more times (you can have a dog!) (you can visit France!) (you can ride the subway alone!) but her aunt dismissed them one by one (No.) (That’s true, but no. Well… no.) (The subway?) Finally, Izzie drooped in her chair, defeated. “All right,” she said to her aunt. “I give up.”

Her aunt took a sip of espresso and smiled faintly over the rim. “Fine then. Write this down. It’s quite simple, really. I’m sure once you hear it, you’ll agree.” Inside Izzie’s head, she grumbled a bit. “The best part of being a grown up,” she said slowly, so her niece’s pencil could keep up, “is being able to eat truly excellent pancakes whenever one wishes.”

Izzie was surprised by the answer yet not too surprised; her aunt was peculiar, after all. (And she did make truly excellent, excellent pancakes.) 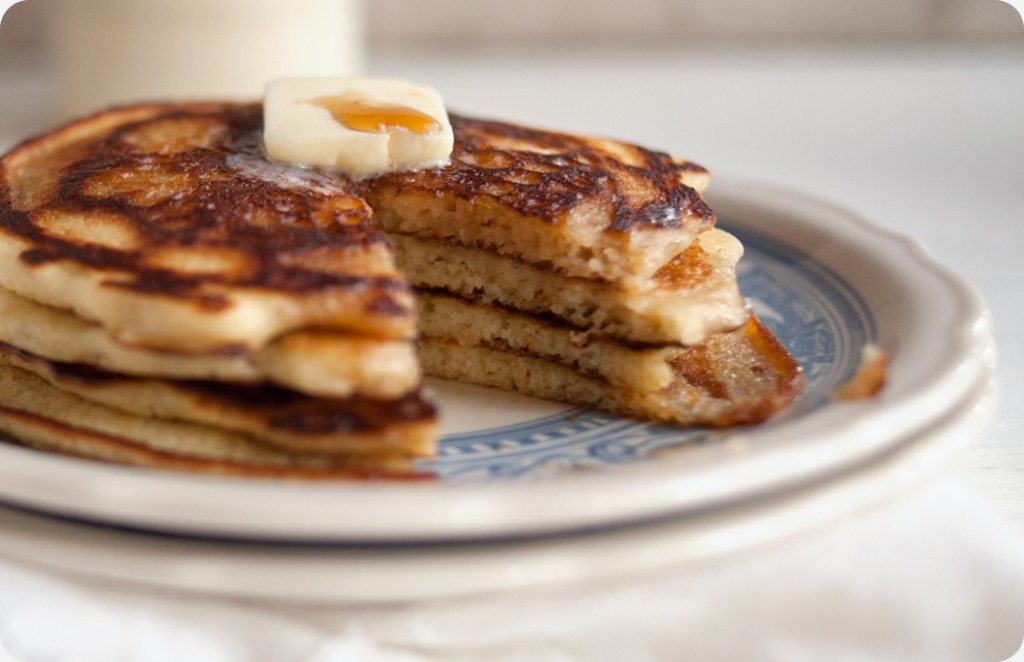 There’s something comforting about having a blog and occasionally sharing quintessential  recipes. I’m not sure why… Maybe because of the sheer volume of recipes out there. So many variations and tests and special tricks and techniques. Not to mention the sources. So many sources. Endless sources. I don’t really need to go into how impossible it is to determine “the best possible” recipe in any category, do I?

Nevertheless, here I am, telling you that these are the world’s best pancakes. But maybe that’s a misnomer- let’s call them quintessential pancakes then. 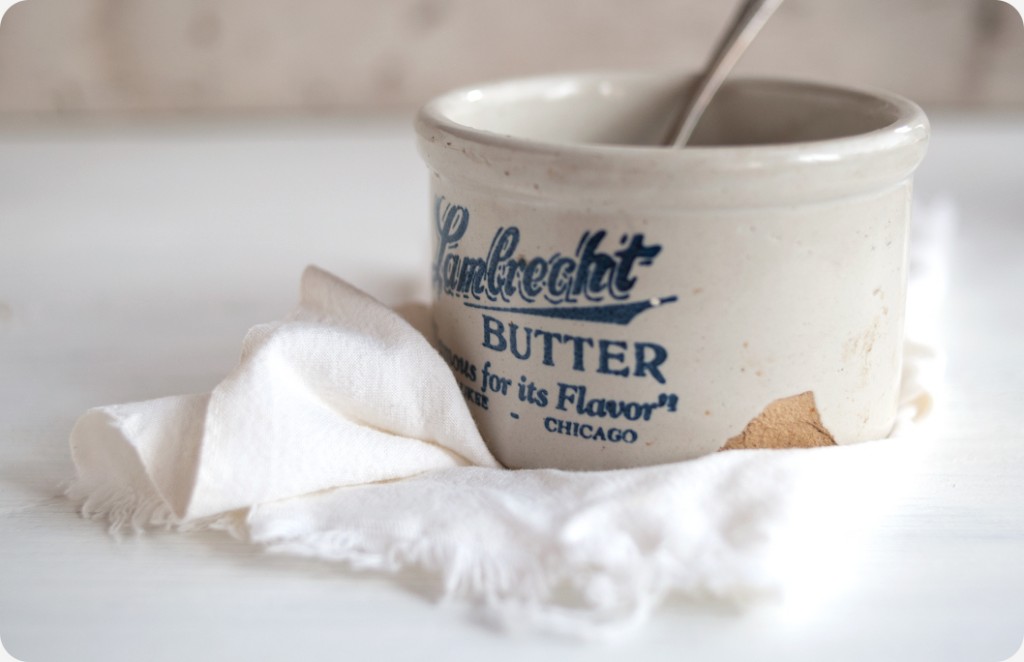 You’re trying to resist me, I can feel it. You’re trying to imagine variants with skim milk, soy milk, no butter, less butter, whole wheat flour, less white flour. No eggs. Maybe applesauce? Just… stop. Just for a second. I commend you for what you’re trying to do, I really do. (I do it myself! Hi!) But now’s not the time. Ruth and I (we’re friends, we’re so close.  We’re likethis.) would like you to just… take a break. Just for now. Just this once. Just for breakfast.

Because we made you pancakes. Crisp and chewy. Shiny with syrup. Topped with a pat of butter. We hope you like them as much as we did. 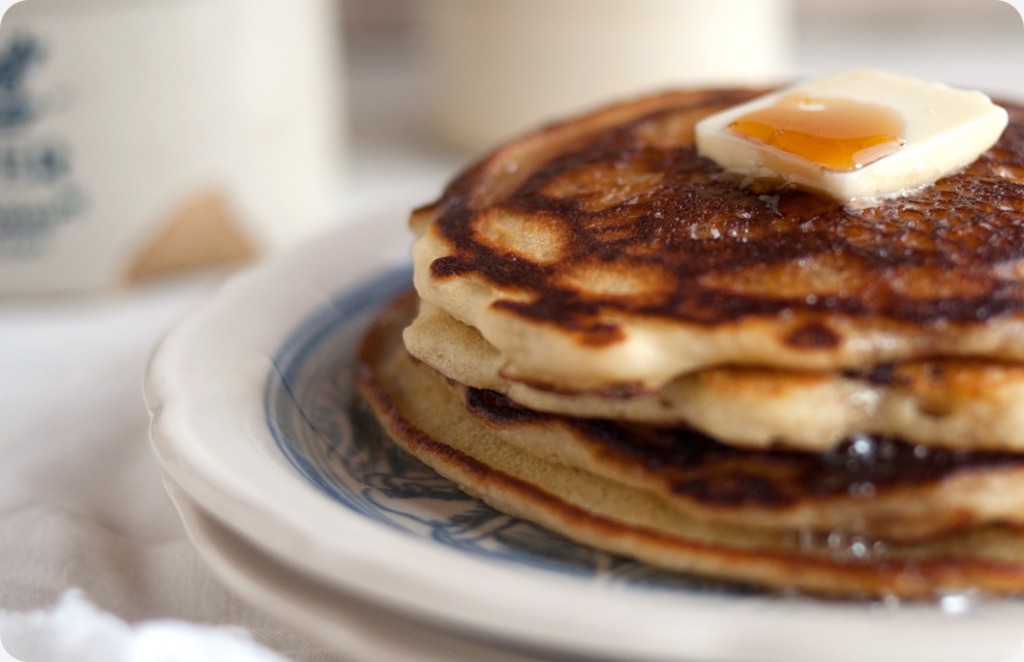 1. Melt the butter. Whisk together the cup of milk, eggs, vegetable oil, then add the butter.

2. In a small bowl, whisk the flour with baking powder, sugar and salt. Whisk into milk mixture until just combined. (Add a bit more milk if it’s too thick.)

3. Skim a good pan with butter or oil and pour in some batter (the size is up to you). Watch as the bubbles appear in the batter, grow larger, and then pop and vanish. When they’ve all popped, flip the pancake and cook the other side.

SKS Note: Eat the first pancake off the pan as a test. This is your right as the maker of breakfast.