“It’s this car! This stupid car!” Aggie shouted back. They were put-putting along the main road in one of Sylvia’s antique cars and the blasted thing barely tipped over at twenty-five miles per hour.

Still, the little tin can had cost her a fortune. Sylvia scowled and clutched her sunglasses as the wind threatened to snatch them off her face. “We wouldn’t be in this thing,” she shouted back to Aggie as they zipped, or puttered, through the open air, “if you hadn’t driven Priscilla into a damn mailbox!”

“I told you, Eduardo was driving!” Aggie had a death grip on the giant wheel. She looked the same way she did when she piloted the boat around the marina. “Why are we going to the diner?” she shouted.

“It’s a restaurant.” Sylvia waved gaily to a farmer on his tractor. So charming, she thought with gritted teeth, and tried to ignore the way the idiot country boy shook his head at her.

“Oh, for heaven’s sake!” Sylvia screamed back and this time, the pain shot through her head at the same time a gale-force wind took her amber sunglasses. “Stop! STOP!”

Aggie wrenched the wheel to the right and the little red toy shot off the road and into the dirt, which clouded up around them. Sylvia seized her throat with her slim hands and gagged. “My god, are you trying to kill us?”

Aggie was breathing heavily and as the dust settled, she started to laugh. Sylvia stared at her. “What is wrong with you? We could’ve been killed!”

“We were going five miles a hour,” Aggie gasped out, laughing. “We couldn’t even kill a gopher at that speed.”

Sylvia shook her head and adjusted the scarf that was barely keeping her head on her neck. “You’ve lost it, Agatha. You’ve completely lost it. Well, I hope you can get yourself together long enough to go back and find my sunglasses!”

That shut her up. Aggie sighed. “I told you not to wear them in the convertible. This happens every time.”

“Yes, well,” Sylvia smiled sweetly. “You’re always so good at finding them. Hurry up, will you?” She nudged her maid off the death trap and back towards the field where her amber babies had skittered off like a diamond-encrusted tumbleweed.

“First, you say we’re in a hurry to get to the diner,” Aggie muttered. “And now we’re making pit stops.”

“It’s a restaurant, you old bag,” Sylvia leaned back in the leather upholstered chair and sighed. It had rained that morning. The air was still damp and smelled like manure and wet grass. Her slacks were already prickled with mud from the road. Sylvia groaned over the linen, though it was slight when compared to her current predicaments.

Like her sunglasses. And the child that had suddenly appeared. The child with her last name.

The one she’d tried so hard to forget. 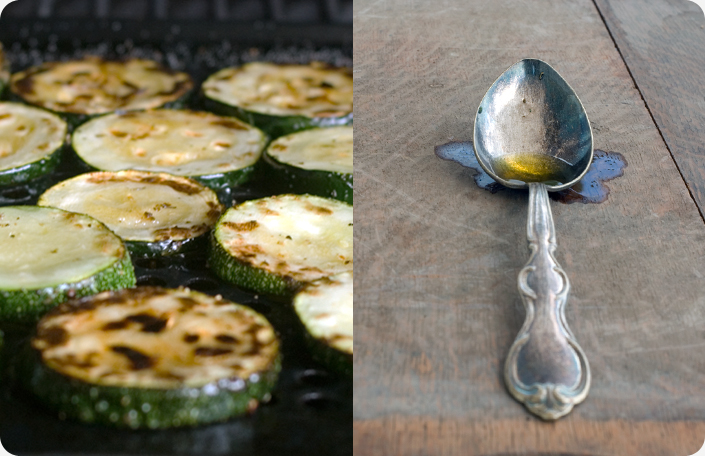 Nicole has left me.

I know- this is devastating. Ok, ok. So, look, she went to visit her family in Pennsylvania. And clean out the family barn she intends to get married in. And cook things with her mother and send me photos. Ok, so it’s not devastating. But it’s sad, you guys. We no longer work together! She got a new job! It’s the end of an era. A very short era. One that involved chocolate.

Still, we mustn’t fret or be dramatic. We must soldier on! And we must tackle that summer zucchini harvest! That little army of zucchs has been slowly mobilizing in your backyard, hearty and weather-resistant little bastards. They need to be stopped before they take over the whole house! We will not stop fighting! Never!

But first, we eat!

From Nicole: We used zucchini from our garden. You slice them up and then lightly coat them with olive oil mixture. Mixture is: some olive oil, crushed garlic, garlic powder, & Italian seasoning. Then you just place them on the grill & grill for about 5 min a side. Then sprinkle Parmesan cheese over them as soon as you take them off the grill and then eat. Delicious!