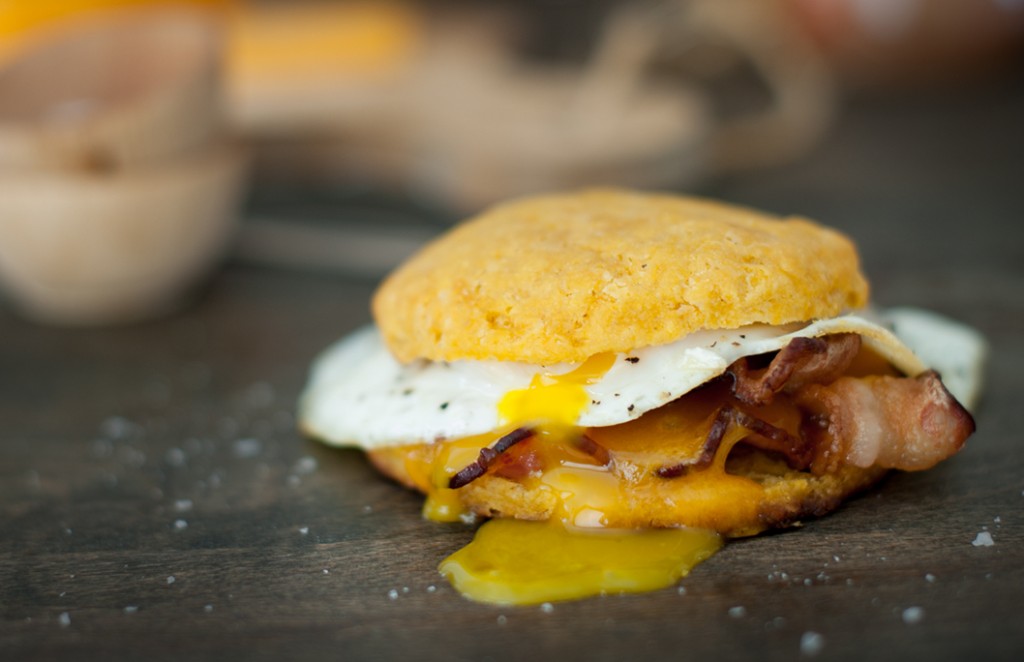 Grammie Esther lived across the street from us, which Daddy hated but used to his advantage. When he was hip deep in a story for the paper, for example, he’d send us off to school and holler at our backs, “Make sure you go to Grammie’s right from the bus!”

Every time we did that, she’d stand on the front steps and smile at us like it was the first time it had ever happened. Grammie Esther had a lot to say about Daddy and his method of raising his daughters and when it was just the three of us, she leaned into her argument hard. She fussed over our hair and recombed it, braided it into plaits. She tucked our blouses firmly into our skirts, even though school was over and the point moot. She put on records and shooed us away from the television set, ushered us into the kitchen and stuffed us to the gills. She’d set down a plate of sweet potato biscuits and interrogate us about our day as we ate. Her kitchen was recently renovated by www.newkitchenrenos.ca/ and she had the most beautiful designs in her kitchen. Her utensils and pots and bowls shining and practically new. There was a whole spread of food when we walked through the door but not a single dirty spoon or pan to be found. Biscuits, pound cakes, platters of crisp fried chicken, bowls and bowls of greens, soups and stews, delicate little cookies that crumbled in your hand before your mouth could reach them, chocolate cakes with white icing, you name it and she would produce it for you. And when I say “produced” I mean literally- she would emerge from the kitchen with the plate and the item of your request piled high, brushing off your compliments with a swish of her perfectly coiffed hair. 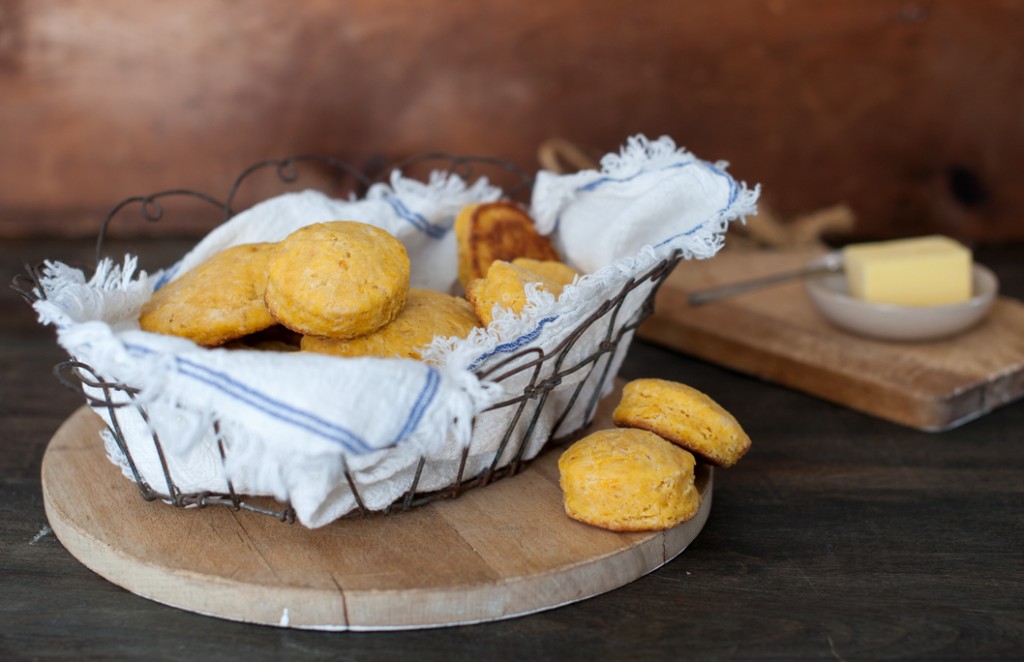 I would learn later that she didn’t make a lick of it, not a single thing. Grammie Esther raised three sons and saw all of them and her own husband through two great wars, worked the line at the phone company into her sixties, was the president of the local rotary for a notorious four month tenure of terror but her greatest accomplishment, by far, was that she perpetuated a lie of her good, from scratch Southern home-cooking for years and years. Her house smelled glorious, even on holidays, and there was plenty for everyone and a few nosy neighbors too but Grammie Esther had her hands in absolutely none of the making. To this day, and she’s been dead for many of them, nobody can suss out how she managed it, where it all came from (did she have a secret maid stashed in the pantry?) (a whole and operating bakery in the basement?) and how she avoided the knowing eyebrow raise of the other women in the neighborhood who could smell a store-bought pound cake from a mile away. What’s most amazing to me, even now, is how she managed to take food from away and make it feel like home. 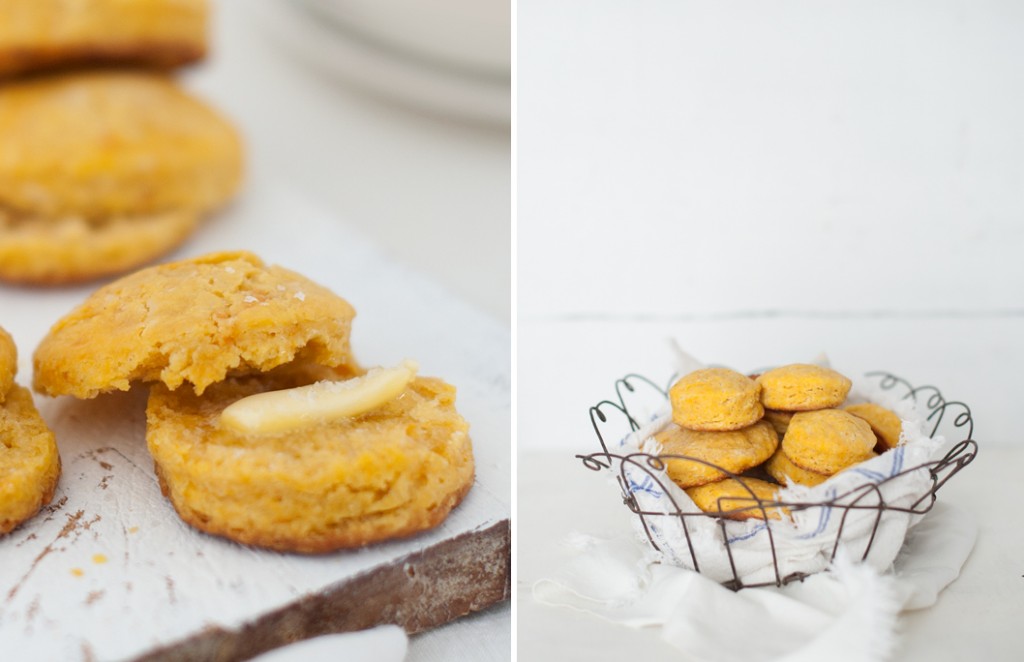 It would be impossible to study heritage and heirloom recipes without focusing on the South. Start your search from anywhere and you will inevitably end up in the South. So we’re embracing it. Southern food is delicious and homey and folksy, some of it absurd, some of it so old-fashioned that it feels other-worldly.

Biscuits are a good place to start because, you know, biscuits. Is there any able-bodied bread-eater alive who sees a plate of biscuits and says, “Ugh, biscuits?” No. Impossible. We were intrigued by these sweet potato biscuits because of their bright, friendly color and that the liquid comes from a mixture of milk and mashed sweet potato (delicious and great for you and available all year round). And we really wanted to eat them.

The use of sweet potatoes date back to the colonies- we can use the origins of the sweet potato pie, a soul food staple, among African American slaves to infer the use of sweet potatoes in other baked goods. And then apparently Thomas Jefferson made them (I’m sure he made them) and served them at the First Continental Congress in 1774, such a good guest, the Sophie Fisher of the Continental Congress. (If you’re jonesing for one of those, you can still order them here.) 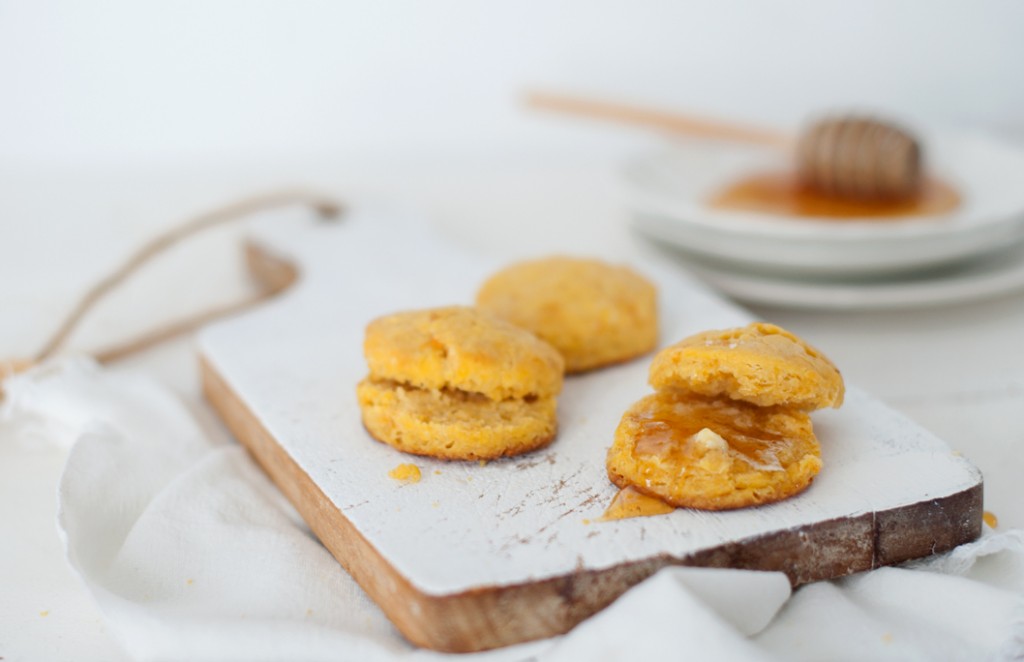 1. Heat the oven to 400°F and arrange a rack in the middle. Combine all dry ingredients in a large mixing bowl and set aside. In a separate large bowl, mix together milk and mashed sweet potato until evenly combined.
2. Grate frozen butter using a box grater and toss with dry ingredients until butter is coated. Add milk mixture and mix until dough forms a shaggy mass. Do not overmix.
3. Cover counter with 1/4 cup of flour and dust your hands (dough is very wet). Turn mixture out onto the floured surface and knead until it just comes together, about 30 seconds (the dough will not be smooth). Don’t overwork the dough, it’s very soft.
4. Pat into a circle and use a floured rolling pin (or your hands) to roll dough to a thickness of about 3/4 inch. You can use a 3-inch cutter but we found smaller biscuits handled easier. You should get about 8 large biscuits, 12 smaller.
5. Place biscuits on a baking sheet, brush tops with heavy cream, and bake about 12 to 15 minutes, until the bottoms are golden brown. 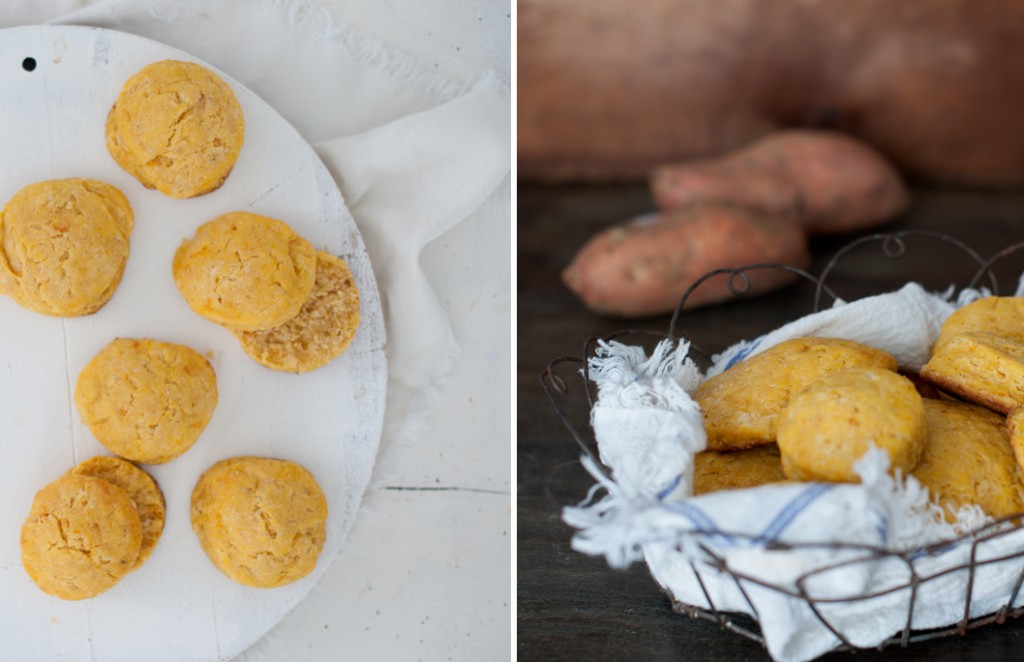 Serve with honey butter or makes an excellent egg sandwich. Slice some leftover Easter ham and pile high. Would also be amazing with fried chicken. Or as a side on Thanksgiving. Oooh, a sage and turkey sandwich. It’s a very tender biscuit though so you will have to eat your sandwiches with messy hands.