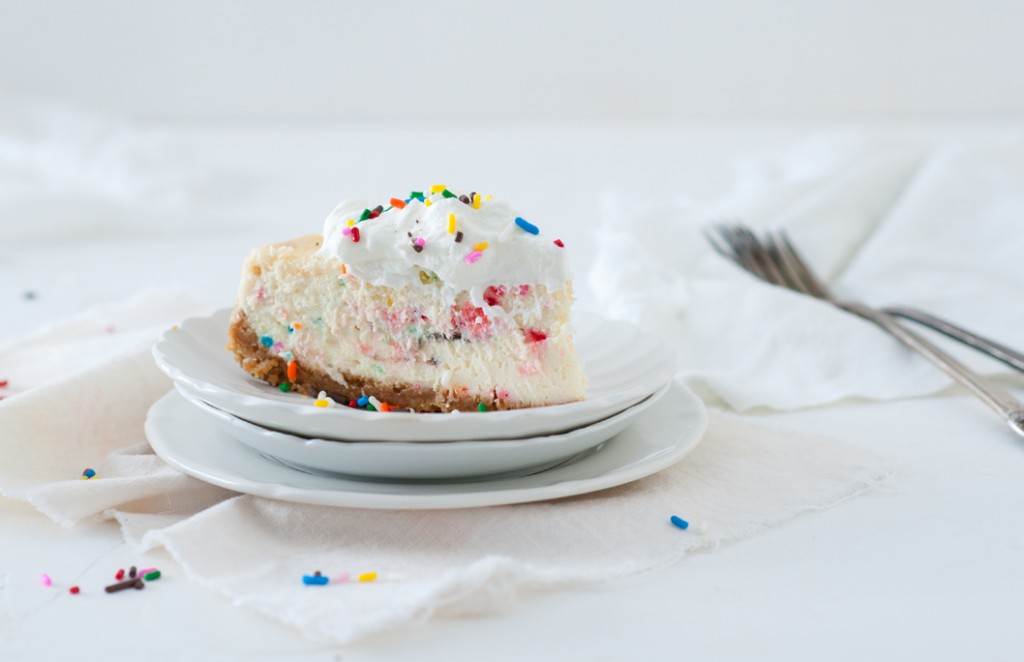 Marla and her daughter Charlotte stood outside by the truck. Charlotte looked over the stacks of boxes in the trunk and Marla went over her list. “Cinnamon swirl rolls?”

“Enough for a small army.”

“I think that’s it.” Marla smiled with satisfaction and nudged her daughter toward the front seat. “Come on, we’ve gotta move. The girls will be at the house by now.” 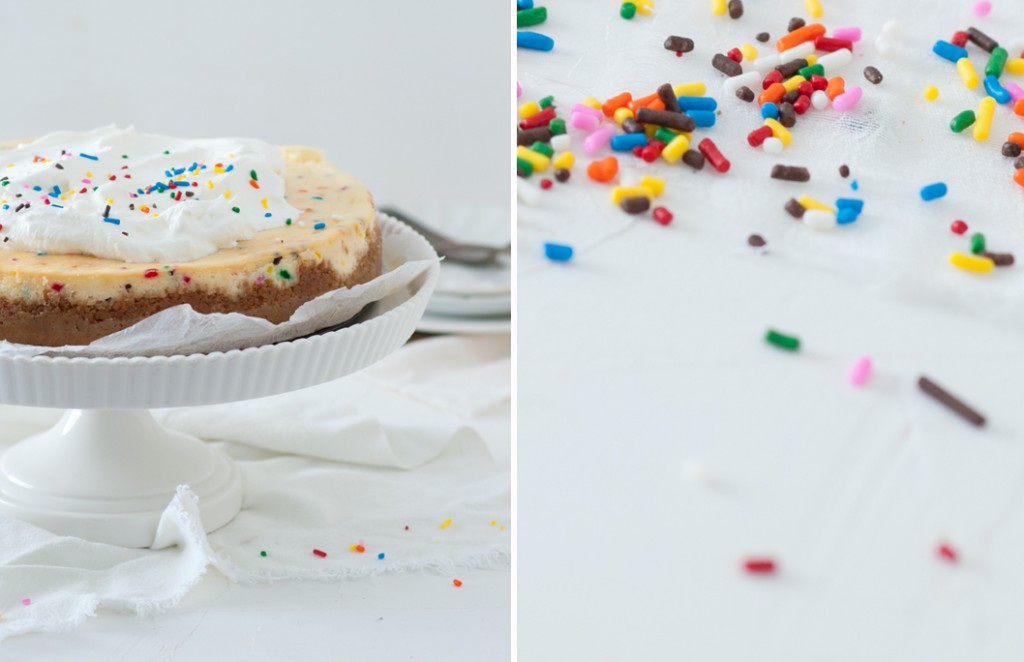 On the drive to Darlene’s, Charlotte heard her mother’s list roll over and over in her head. She watched the trees change as they left one county and entered the next. It was nearly forty minutes to Darlene’s house. Her place was the only one big enough to house Marla and the rest of their girlfriends, though it was the most out of the way for everyone. Over the years, the weekend-long festivities had extended to the groups daughters who were now all in their early to late teens and had their own weekend-long party in Darlene’s basement. Charlotte was fifteen, right in the middle of the group, who were only friends this one weekend a year. She frowned, feeling the usual nerves and antsiness that comes with spending the weekend with girls she barely knew, and found herself saying, “You’re not even able to eat any of the food we’re bringing.” Marla was diabetic and “recently and highly sensitive to gluten.” Charlotte glared at her mother, as if this were her choice of affliction. “Why’d we bring all that food if you can’t even eat it? You can’t even get anything out of it, all this work and planning and stuff.”

Marla smiled at the same changing trees. She had none of her daughter’s nerves, only her anxiousness to get there already, to tuck into two days of long, winding conversation, bottles of cheap wine and enough food to feed Terre Haute. She inevitably came home more tired than when she started but happier too. The talking was what she was needing most. Every year, it seemed like they all needed it more than ever. “There are different ways to get fed, baby girl.” She settled back in her seat, content in the drive and unbothered, for once, by her daughter’s sudden silence. 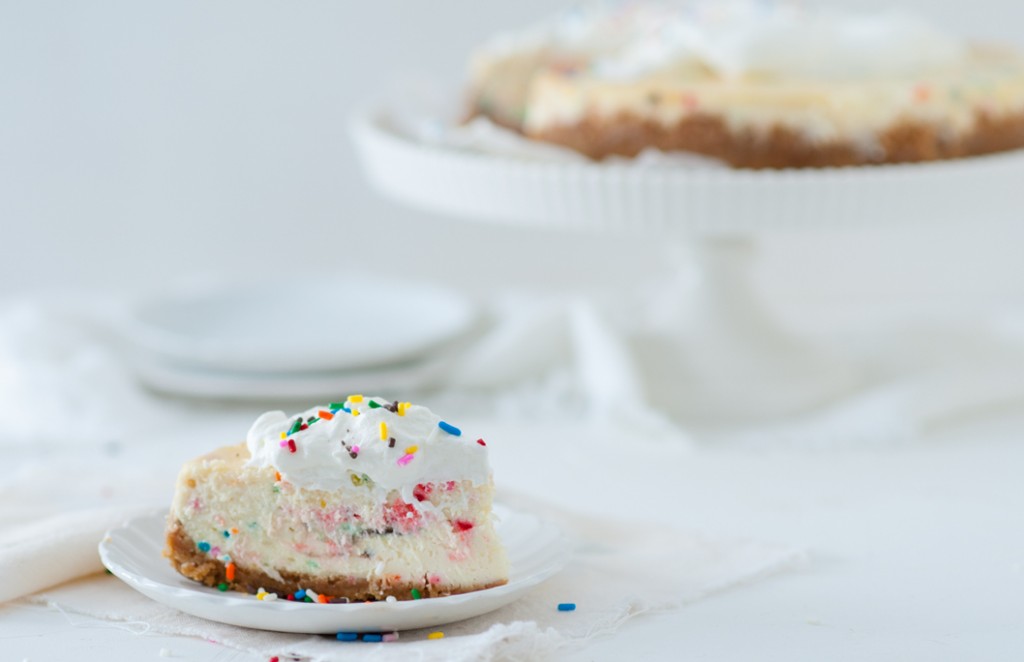 YOU GUYS. It’s the middle of July. Already. Summer is here, it is happening. It can’t be stopped.

I spent the weekend with a bunch of girls/ladies/women that I whole-heartedly adore. The little snippet above should give you a good idea of how it went down and how I’m feeling right now. I feel like I can sleep for a week but I am very happy. (Also Trainwreck is awesome; if you’re in need of some girlfriend time and your girls are busy, Amy’s a good substitute.) And hey, cheesecake. With sprinkles in it. It didn’t make the roster for this weekend but I’ve already got it in mind for next time. 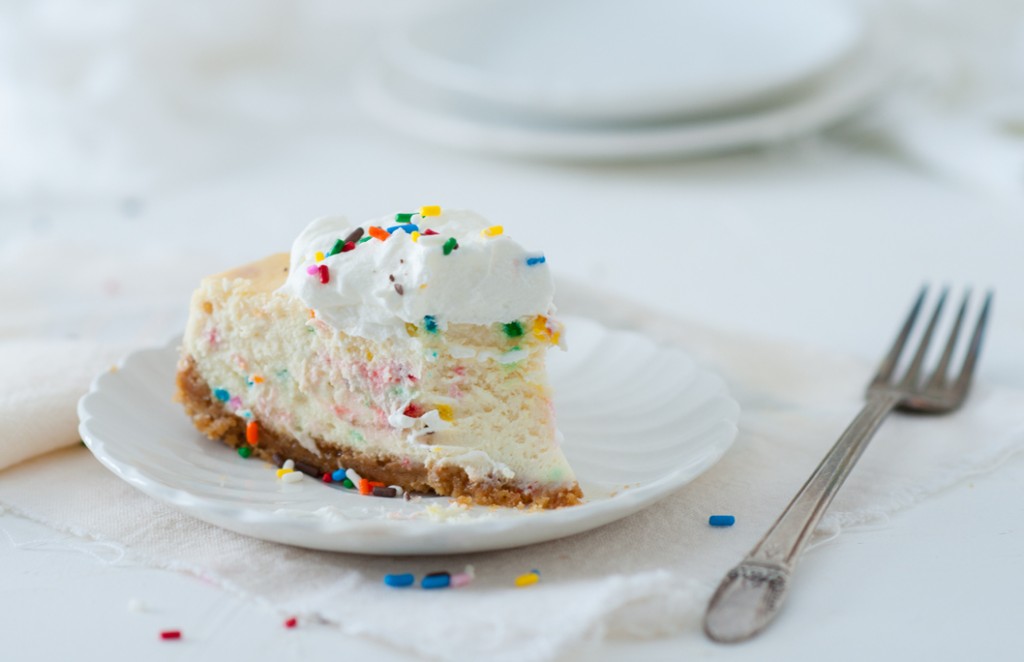 *Note on sprinkles: be gentle when folding in rainbow sprinkles and don’t overmix.

1. Adjust oven rack to the lower third position and preheat the oven to 350°F. Spray a 9-inch springform pan with nonstick cooking spray. Wrap aluminum foil on the bottom and tightly around the outside walls of the springform pan. Set aside.

2. Make the crust: Grind the graham crackers in a plastic bag with a rolling pin or a food processor, until fine. In a bowl, mix the graham cracker crumbs, melted butter, and granulated sugar until combined. The mixture will be thick, coarse, and sandy. Press into a 9-inch springform pan and halfway up the sides. Make sure the crust is very compact and tight. Bake the crust for 7 minutes. Let cool as you prepare the filling.

3. Make the filling: Using a handheld or stand mixer fitted with a paddle attachment, beat cream cheese and granulated sugar together on medium speed in a large bowl – about 3 full minutes until the mixture is smooth and creamy. Add the sour cream, vanilla, and almond extract and beat until combined. On low speed, add the eggs one at a time, beating after each addition until just blended. Very gently fold in the sprinkles, starting with 3/4 cup, and they may bleed a little.

4. Pour the filling into the cooled crust. Place the springform pan into a large roasting pan and place into the oven. Fill with about 1 inch of hot water. The foil wrapped around the pan will prevent water from leaking inside.

5. Bake for 50-60 minutes or until the center is almost set. (When the cheesecake is done, there will still be a 2 or 3 inch wobbly spot in the center.) Turn the oven off and open the door slightly. Let the cheesecake sit in the oven for 1 hour. Remove from the oven and allow to cool completely to room temperature.

6. Refrigerate overnight or at least 6 hours. Top with additional sprinkles and whipped cream, if desired. Cover leftover cheesecake and store in the refrigerator for up to 4 days.

7. Make ahead tip: Freeze baked cheesecake for up to 2 months. Cover tightly and freeze. Thaw overnight in the refrigerator before serving.