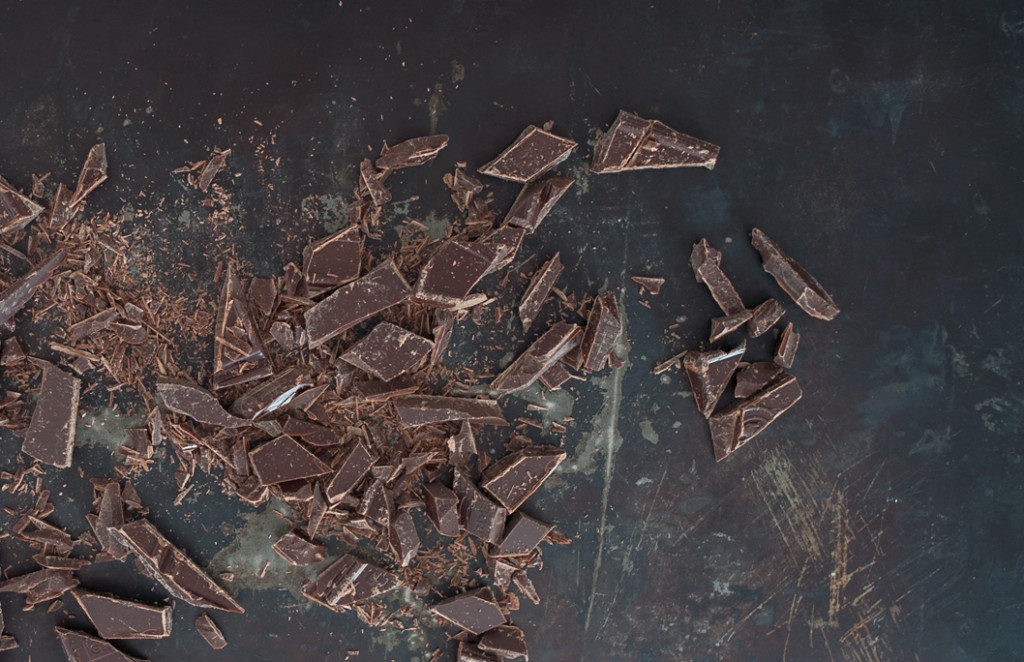 Callie was not bothered by the fact that she had been born on Halloween. At least, until Halloween came and then she was very much bothered by it.

When she was very small, it wasn’t a problem at all. Her parents made quite a fuss over her birthday and banished the spooky, scary decorations to the basement. She was surrounded by grandparents and aunts, uncles, doting cousins who begrudgingly left their costumes in the car. There was cake and balloons and the only spider webs present were the ones her parents couldn’t reach with the feather duster while preparing for the party. click here for Emicakes  Incorporate enchanting sea creatures, such as anemones, turtles, tropical fish, sea lions, jellyfish, sea stars, dolphins, whales, or sea horses. We did a wedding in Monterey a few years ago, and the reception was at the Monterey Plaza Hotel – which is right next door to the Monterey Bay Aquarium. The entire wedding party visited the aquarium the day before the wedding, experienced a private tour and had a wonderful time. The aquarium was the perfect inspiration for the theme of the cake. The cake designer subtly incorporated some of the sea creatures from the aquarium into the dessert. The topper was a large pearly clam with jewels and pearls pouring out of it, cascading down the side of the cake. (not real pearls, but fondant balls covered with pearl dust!)

And then, slowly, Halloween crept in. A cousin defiantly appeared in Callie’s birthday pictures dressed as Spiderman, his arms crossed over his chest. The birthday party got pushed earlier and earlier every year, to make more time for trick-or-treating. Finally, the kiss of death- candy in little bags as the favor with a black spider clinging to the handle. Callie shook her head with disgust but could do nothing, lest she seem ungrateful.

As a young girl, she was resentful of the holiday’s intrusion on her birthday plans. As an adult woman, she shrugged and cast her birthday aside as most do. Some years, she was grateful that Halloween obscured it altogether.

It was her husband TJ who cured the Halloween birthday. For years, he stood back and watched as Callie struggled with how to handle the day. Finally, one birthday, when she complained on the couch during the umpteenth commercial that starred the sexy nurses dancing around with werewolves in front of one of those pop-up Halloween stores, TJ made his play. “Get your coat.” He ignored her protests and ushered her out the door.

It was late and they joined a group of kids on the sidewalk who were making the rounds. “What are we doing?” Callie asked. She folded her arms over her chest and wished she’d thought to put on a bra or at least her nicer sweatpants. TJ whirled her around and pointed to a house down the road. “Knock on the door and demand some candy for your birthday.”

Callie stared at him. “Are you insane?”

TJ gave her a look, the one he reserved for closing deals and proposing marriage after the fourth date. He folded his own arms over his chest and planted his feet. “Indulge me.”

Callie rolled her eyes. “This is nuts.” And she started to turn around and head back inside when she saw a group of nine-year-olds joyfully pocket their candy from the house across the street. She saw herself at nine, sitting at home with a birthday crown on her head, watching the kids walk by in their costumes, and grown woman Callie, lawyer Callie, responsible recycler Callie, marched up to the house those kids had just left and knocked soundly on the door. 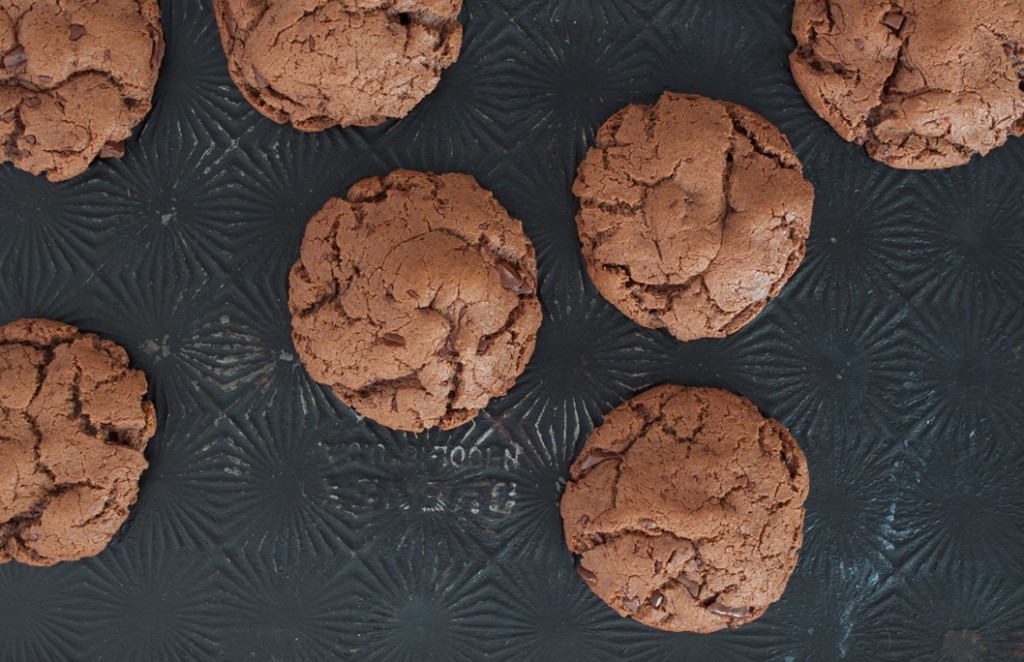 Does it make me sound endearing to admit how much I love my birthday? I mean, it’s mostly food related. But I remember when I was a kid and used to have my birthday party at Jumper’s Jungle Family Fun Center. (Does that help me not sound like a five-year-old diva?)

The Year of 32 (as it will be known) was a big growing year for me. When you get to be a certain age, young things, you don’t grow in height anymore but you do grow in other ways (some years, not so much. What up, 25?!) This year for me was the year that I calmly looked myself in the mirror, smiled and said, “Welp, this is as good as it’s gonna get.” And actually meant it.  Food and I, despite our many bumps, are finally at peace.

On every day except my friggin’ birthday. Because BIRTHDAY.

Birthday means pasta, a giant bowl of it. And a cream sauce. And pancetta. And bread. And garlic bread. And wine. And brownies, two kinds (one of them gluten-free! Do I have good friends or what?). And a magical coconut cupcake with a candle in it. And peanut butter and Nutella, by the spoon. And then in cookie form. Because we can do this, we have the technology. BECAUSE BIRTHDAY. 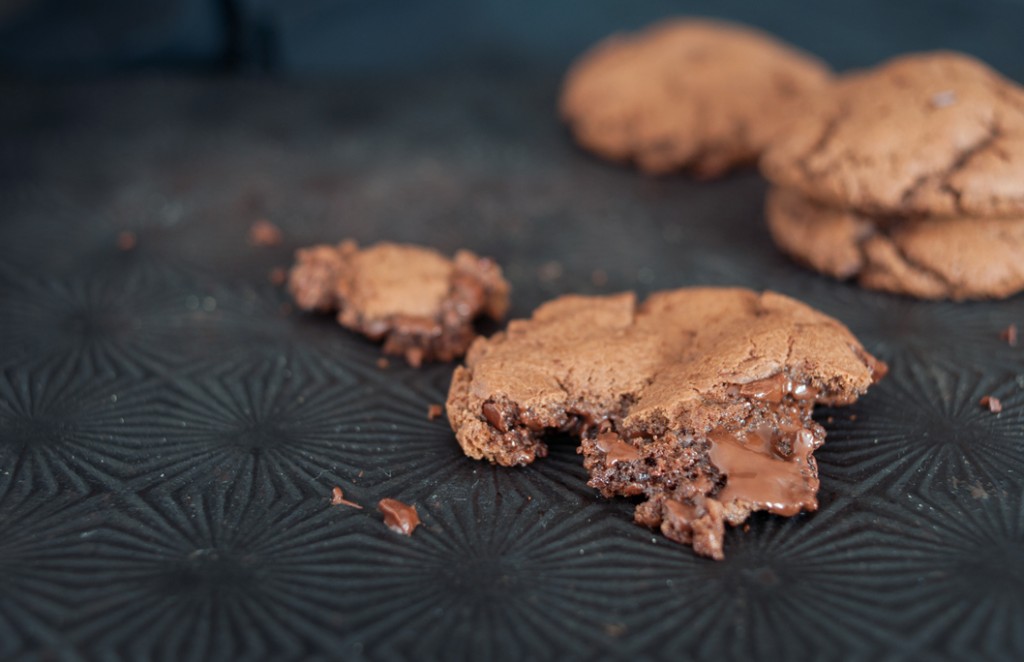 1. In the bowl of a stand mixer fitted with the paddle attachment, combine egg, Nutella, peanut butter, brown sugar, vanilla, and beat on high power to cream ingredients, about 5 minutes (scrape down the sides of the bowl as necessary). Note from Averie Cooks: The dough will go from very granular, gritty, and loose to smooth, oily, and well-formed in a large mound. If your dough has not come together or is at all gritty, continue to mix until it smooths out.

2. In a small bowl, whisk flour, baking soda, and salt. Add to mixer and incorporate. Another note from Averie: Dough will not look like normal cookie dough and will be tiny balls and flakes that seem almost feathery in the bowl. This is okay. Add the chocolate chunks and beat momentarily to incorporate.

3. Using a medium cookie scoop (about 2 tablespoons) or your hands, scoop out 15 mounds of dough and place them on a large plate. Using your hands, gently squeeze and compact each mound so that it’s tightly packed together. Dough will be both crumbly and oily, but when squeezed, it should stay together. Cover plate with plastic wrap and refrigerate dough for at least 2 hours, up to 5 days, before baking.

4. Ready to bake! Preheat oven to 350F and line 2 baking sheets with parchment, or spray with cooking spray; set aside.

5. Space dough 2 inches apart (8 per tray) and bake for 9 to 10 minutes, or until top have just set, even if slightly underbaked in the center. Don’t overbake. Cookies will firm up as they cool, and baking too long will result in cookies that set up too crisp and hard (The cookies shown in the photos were baked for 9 minutes, with trays rotated at the 5-minute mark, and have chewy edges with pillowy, soft centers).

5. Allow cookies to cool on the baking sheet for about 10 minutes before removing and transferring to a rack to finish cooling. Store cookies in an airtight container at room temperature for up to 1 week, or in the freezer for up to 3 months. Alternatively, unbaked cookie dough can be stored in an airtight container in the refrigerator for up to 5 days, so consider baking only as many cookies as desired and save the remaining dough to be baked in the future when desired.

(Did you miss us? We missed us too. Yay Nicole’s move is done! Yay to having a kitchen again, almost! YAY!)