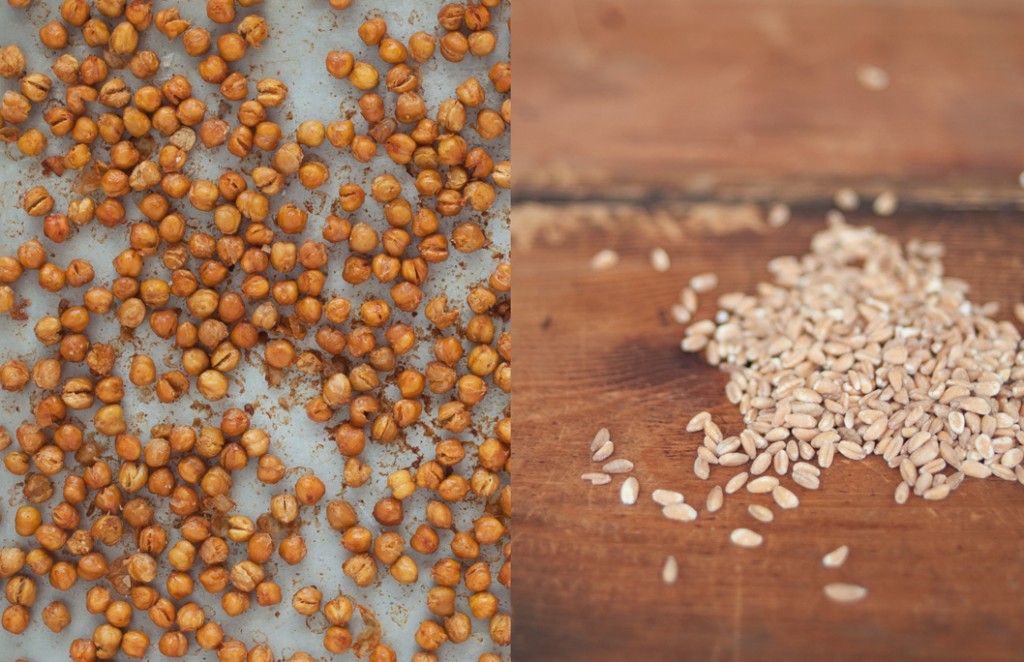 Little Talia picked up the princess doll and the prince doll and regarded them seriously. “It is I, Pharoah Talia,” she said in a booming voice and she made the dolls tremble in her wake. “I hear you have been mean to each other. Prince Arthur, you speak first.”

Talia’s voice deepened as the prince went to his knees (which was really lying flat on the floor because the doll couldn’t bend his knees). “I did not do anything wrong.”

“Yes, you did!” The Pharaoh’s voice boomed. “You make the princess upset every day.”

“She calls me fat and lazy.”

“You are fat and lazy!” Boomed the pharaoh and Talia made the cardboard walls of their castle shake. “You lie around on the couch all day and the princess does everything. And then you complain. And you!” The pharaoh rounded on the smug princess. “You bring him his dinner and you listen to his complaints and you say nothing.”

“I am trying to be kind,” replied the princess. She had long blonde hair and Talia wished from a place deep in her heart that her hair was dark like Talia’s. “I want him to be happy.”

“You just want someone there,” the pharaoh said sadly. “You should listen to Dr. Edelstein.” 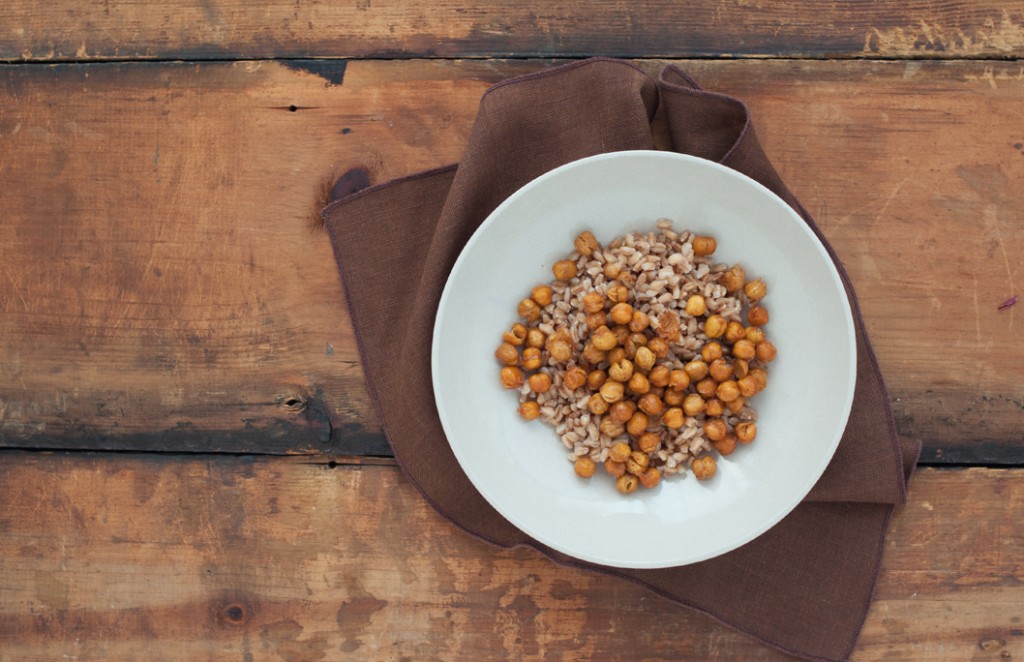 Talia shot up in bed, her heart in her throat. The dream had felt so real, she thought. But she wasn’t really in her childhood room, on the floor, with a paper crown on her head. She was in bed. In Denver.

Beside her, Arthur groaned. “You woke me up. Now I won’t get back to sleep.” He rolled his big body over and glared at her with one eye open. “And I have that interview tomorrow and now I’ll be thrown off because I didn’t sleep and I won’t get the job and then you’ll get mad at me and-“

Talia looked down at him. “Yeah, we’re breaking up.”

“And- what?” Arthur blinked.

“We’re breaking up. Right now.” Talia swung out of the bed, her bed and surveyed the mess of sheets and Arthur in the middle, blinking like a beached seal. “Get up. Time to go.”

“No, I just forgot something. Come on! Up and at it! Let’s go.” She grabbed him by the arm and pushed him out of the bed. He stood in his boxers, his jaw dropped. “Let’s go. You can go to Dave’s. I’m sure he won’t be surprised. You can get your stuff in the morning. Let’s go. Shoes.” She picked up his barely worn sneakers and handed them to him. He stared at her.

“Wha- you can’t. Forgot something?” He looked torn between hurt and outrage. She would’ve felt bad but she was already picturing her house and her bed and her life without him in it. She put her hands on her hips and looked at him expectantly.

“Yes, I’d forgotten something. That I’m awesome.” Talia smiled and tossed him his coat. “I’m the Pharaoh.” 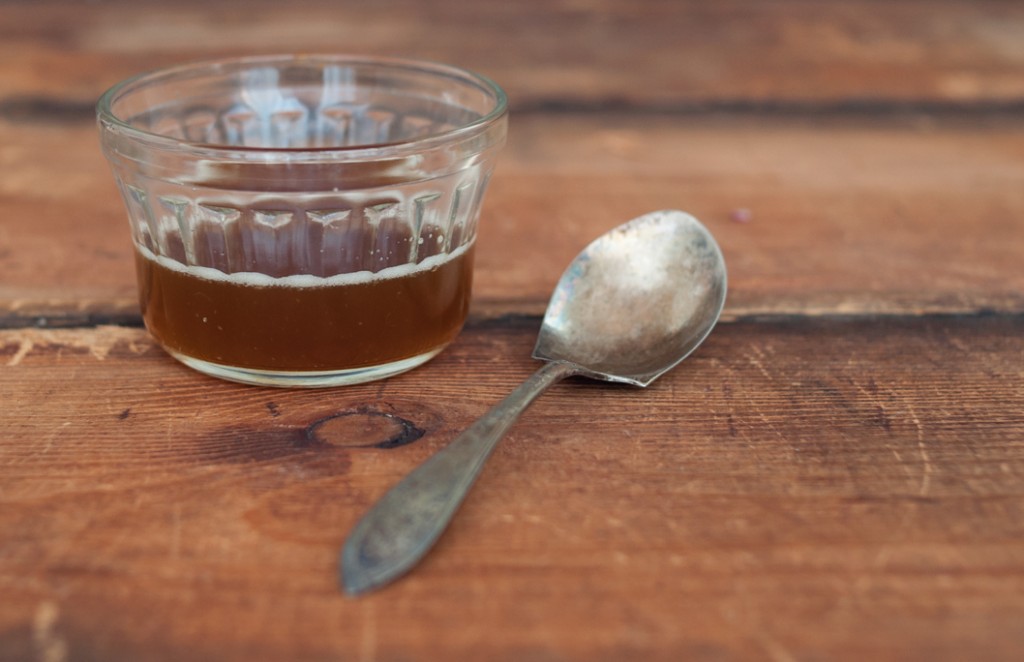 Ah, I love the smell of resolutions in the morning.

Things I will not be doing right now: apologizing if this is the 17th salad recipe you’ve seen from a blog this week, apologizing for farro (because it’s delicious), apologizing for reminding you that you made some promises to yourself for the year, apologizing that this isn’t a brownie recipe but one for warm farro salad with chickpeas, feta and spicy dressing. Yeah, we’re not apologizing for anything this morning, you know I had to try my new spicy sauce I got from the best hot sauce store. I love resolutions personally- change is good. Positive change should be celebrated all year round but I’m down with it getting some attention in January. That’s not a bad thing. And the very best part of a salad is that it makes you feel less guilty when you eat a deep chocolate peppermint sable cookie at work two hours later.

So a little cheerful reinforcement this morning. Whatever you want to do for yourself, you can do. If there’s an ass to be kicked, then kick it. And remember: farro today means cookie tonight. 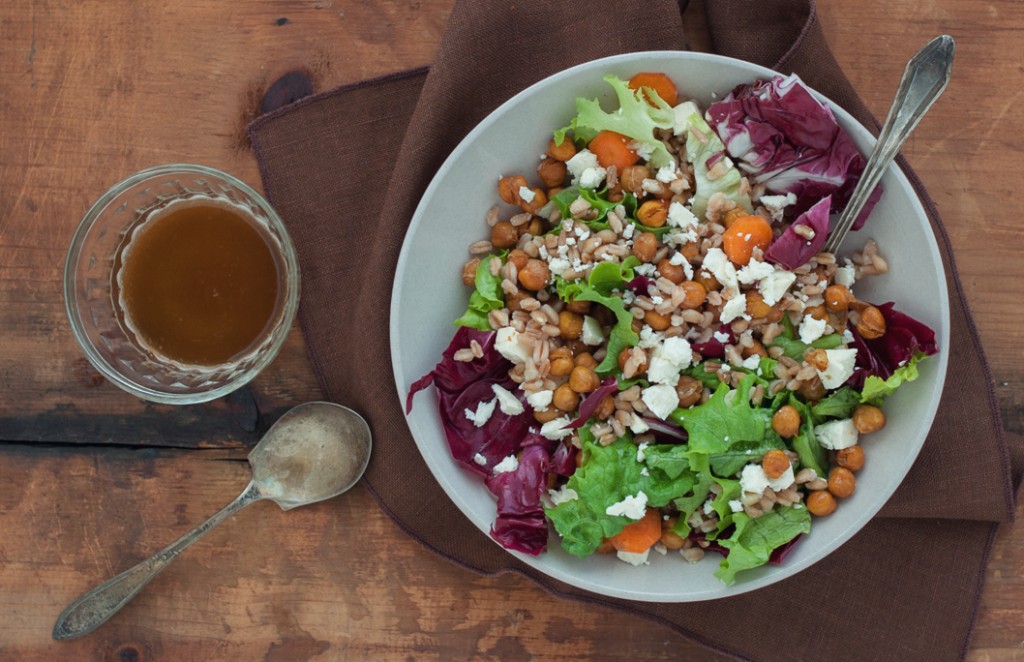 1 Cup of farro
½ Teaspoon of salt

Note from SKS: Have you discovered roasted chickpeas yet? If you haven’t, now is a good time. I love roasted chickpeas in this salad- toss drained and dried chickeas with drizzle of oil of your choosing, add salt and spices to taste, and roast in a hot oven until barely crisp. Yes, it’s an extra step but you will not come back from this. Roasted chickpeas are life changing. – J

1. Make the farro: put the farro in a medium (2 ½- to 3-quart) saucepan, add cold water to cover, and set it aside to soak for 30 minutes. Then drain the farro, put it back into the saucepan, and add 3 cups of cold water and ½ teaspoon salt. Bring to a boil; then reduce the heat to maintain a gentle simmer and cook until tender but still a little chewy, about 45 minutes. When it’s ready, drain it, and either use it while it’s warm or transfer it to a storage container for later use. (Covered and chilled, cooked farro will keep for a few days.)

3. To assemble a portion of salad, scoop out a couple of large spoonfuls of farro – maybe 1/3 to ½ cup – and put it in a wide bowl. (Molly recommends warming it slightly in the microwave.) Add a large spoonful of chickpeas, a good handful each of escarole and radicchio, and maybe half of a carrot, sliced. Top with a generous amount of feta, and then drizzle dressing  to taste. Toss and enjoy.

Leave a Reply to Leigh Kramer