Liliana sat at the counter with her crayons. It was her favorite spot, the red stool, third from left of the register. She tucked one leg under the other and scratched the purple crayon up and down, up and down.

There was no one in the diner but her and her grandmother Marie, who worked behind the counter. It was late, dark outside, and the other stools and chairs were propped up on the tables. The floor was scrubbed and mopped clean. Everyone else had gone home after a long day of work in the summer rush but Marie was still behind the counter, humming. She’d turned on the radio and Willie Nelson was singing, his voice like it bounced off the side of a tin can.

Liliana examined the picture of the flower she colored in and glanced up in time to see Marie (everyone called her Marie, even Liliana, even Lilian’s mother Trixie) lift a jar of her homemade fudge sauce and pour it over the ice cream cake that had emerged from the freezer and steamed on the counter. The pour was generous and Liliana winced to see her grandmother pour every last drop of the precious fudge sauce until the cake was good and drowned. And back into the freezer the cake went.

“Is the cake for dessert tomorrow?”

“It is not.” Marie wiped the fudge sauce from her hands on her waitress apron and set about chopping the candy that would be sprinkled over the top. “It’s for Mavis. She’s feeling poorly.”

“Is she sick?” Liliana frowned. She was eight but even she had her doubts that if she ever got sick, her mother would fix her a slice of double down delicious ice cream cake with Marie’s hot fudge sauce as a lid.

“Nope.” Marie finished wiping down the counter and set her hands down to rest on it. She took a breath and rolled her head around. She sighed and cracked her back. She was heavy in the arms and back and for a second, in the diner’s dim lights, she looked a hundred years old, old enough to make Liliana’s chest tighten. “No, she’s just had a rough week. A kind of week where the horse kicks you even after he’s thrown you to the ground, kick you in the gums and keep on walking, that kind of week.” Marie knicked a piece of candy off the counter and handed it to Liliana. “You know what I mean, sugar plum?”

She didn’t. Liliana was only eight after all. But despite being only eight, Liliana knew something more important than what it was like to have a week kick you in the gums and keep on walking- she knew enough to hope that if she did ever have a week like that, she’d be lucky enough to have someone like her grandmother to stand around in an empty kitchen, at the end of a long, hard day of her own and make her the world’s most beautiful, staggeringly crazy cake.

This is an ALL CAPS CAKE, you guys. BECAUSE LOOK AT THIS CAKE. It hurts my heart, this cake. Nicole said it’s insanely good, curse her! Because now I need to make it IMMEDIATELY and eat the whole damn thing by myself because lookit. Ugh.

There’s usually a lag of a few days between when Nicole makes the week’s recipe and when I make it BUT NOT THIS TIME. Shit just got real. This cake and I. Things are happening.

Hope your weekend is this cake- all caps worthy. 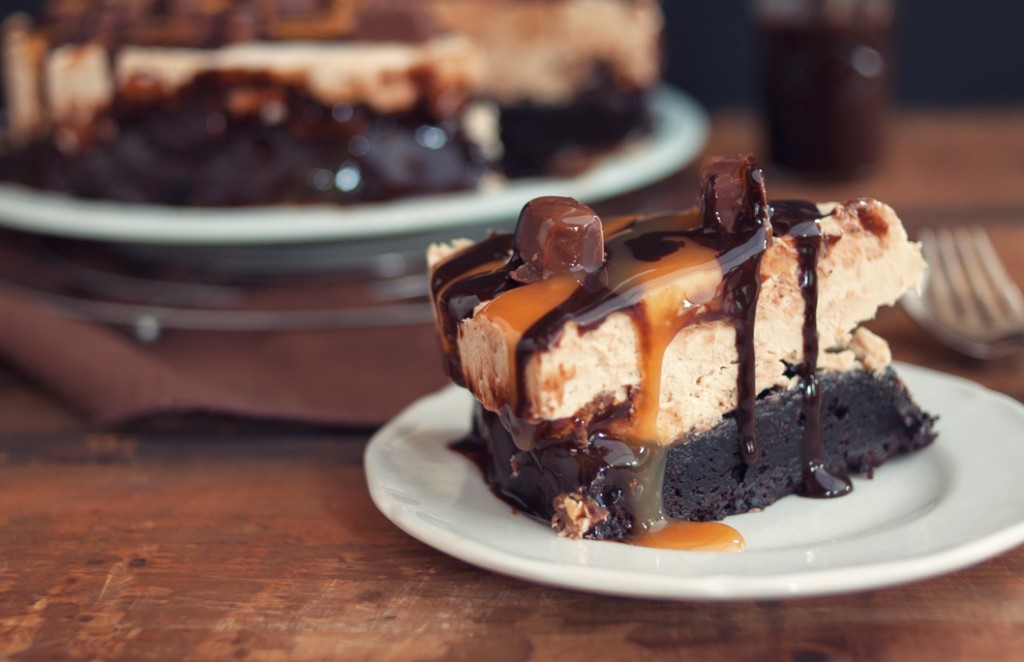 1. Make brownies according to instructions on box mix and pour into two greased, 8-inch springform pans (lined with parchment paper for easy removal)

2. Bake at temperature on box but reduce baking time to about 20 minutes.

3. When brownies are done, allow to completely cool.

4. In the bowl of a stand mixer, or bowl with hand mixer, combine milk, cream cheese, sugar and peanut butter. Mix until completely combined.

6. Take one of the 8-inch pans with your cooled brownie at the bottom. Line the sides with parchment paper as well.

7. Spread 1/2 cup of caramel sauce and 1/2 cup of chocolate sauce over the brownie. Top with first group of chopped Snickers.

8. Top with half of the peanut butter ice cream.

9. Add second brownie to the pan, on top of the ice cream.

10. Again cover with 1/2 cup of caramel sauce and 1/2 cup of chocolate sauce. Top with second group of chopped Snickers.

13. When frozen, remove from springform pan and remove parchment paper from sides.

14. Top with additional caramel sauce and chocolate sauce, allowing it to drizzle down the sides.

15. Cover with remaining chopped Snickers and a little more caramel and chocolate sauce.