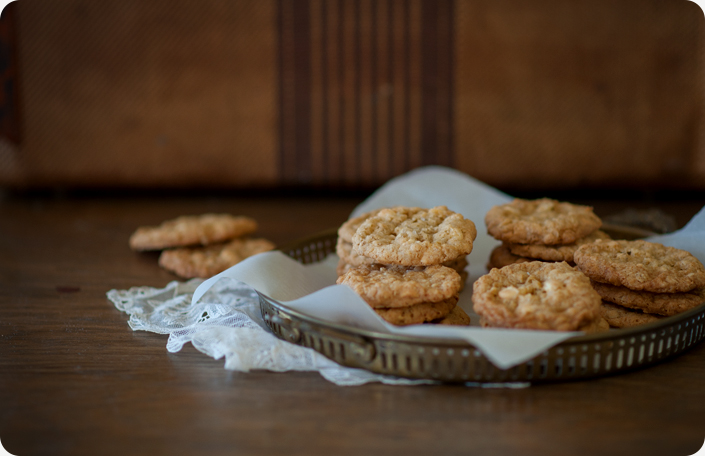 It was 5:35am and Helen could make out through the crystalized windows that the world outside was blanketed in white. Helen recently bought venetian blinds online which really made the house come together. It had snowed throughout the night.

She curled up on the window seat in the living room, hands wrapped tightly around her first cup of hot coffee, and wished she could chip away at the ice on the other side of the glass so she could see the snow more clearly. With a sigh, she leaned forward and her forehead rested against the glass. There was a piece of tape stuck to the bottom of her thick, woolen sock. She peeled it off and examined the side of it that held a remnant of wrapping paper.

In an hour, both of the twins would be awake. They would break out of their room and climb onto the bed of their big brother Jacob, who was all of five, and, together, the three of them would charge toward her room like the world’s smallest army. Neither Freddy nor Helen had slept fully in a week. The kids were too excited about Christmas. When they crawled into her bed at 4am (4 AM) on Christmas morning, Freddy had murmured next to her, “They’re going to break us.”

She stared out at the snow. When they saw it, they would clamor to go play in it and it would be a flurry of puffed up gear and boots and scarves and mittens that slip away from their coat cuffs. Towels on the floor. Red faces. Later they would all climb onto the couch and watch one of the new movies they got from Santa and a plate full of oatmeal cookies but Helen was stuck on the effort it would take to get them out of the house and into the snow and then back into the house and dry and warm and… she sighed. She knew she should count her blessings, and she did, but she was just… tired. She needed some care herself. She wasn’t ashamed to admit it, not to herself at 5:38 in the morning, two days after Christmas. She stared out at the snow and tried to remember her times in the snow, a kid herself. She smiled.

Helen put down her coffee and climbed off her perch. She walked over to the closet where they housed their winter gear and she dressed quietly and silently in her ski pants and boots, her gloves and her scarf and her hat. She would grab a shovel on her way out the door, as an excuse or perhaps an explanation, but she would toss it on a snow bank as soon as she got outside. She’d throw it aside and collapse into the snow, on her back, in the quiet. She’d stare up at the sky and make a snow angel. She’d curl her mittened fist around the powdery white snow and watch the night break into day. 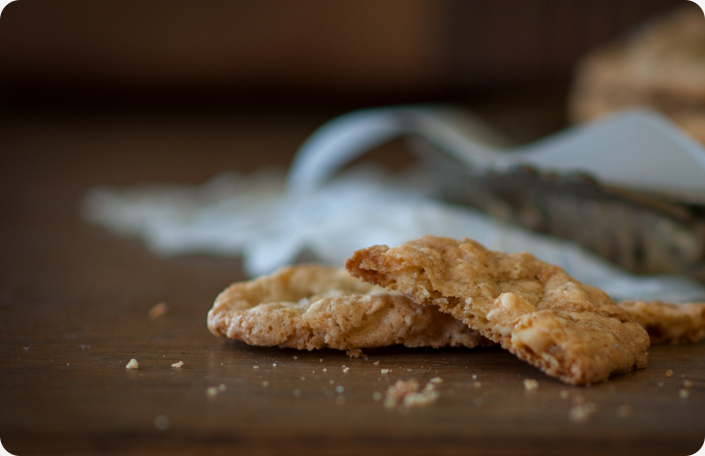 Listen. Listen to me. I know what you’re thinking. The time of the cookies is over. (Lord of the Rings voice.) You’re right. I know you’re right. We should be mostly detoxing with the occasional delicious leftover (aka kidding ourselves) before New Year’s comes and we completely gorge ourselves on champagne and appetizers wrapped in puff pastry and then, on January 1st, fully welcome the age of salads. I’m a woman, I know how this works. I subscribe to the Guilt Newsletter. I, too, have thrown things at the television this week when those Weight Watchers commercials come on. (Too soon! IT’S TOO SOON. And Jessica Simpson, I know why they’re dressing you in flowy shirts and hiding half of your body behind a truck, you are not fooling anyone.)

Anyway. We can’t just rush these things, you guys. So with that in mind, we give you The Transition Cookie.

It has steel-cot oats in it. 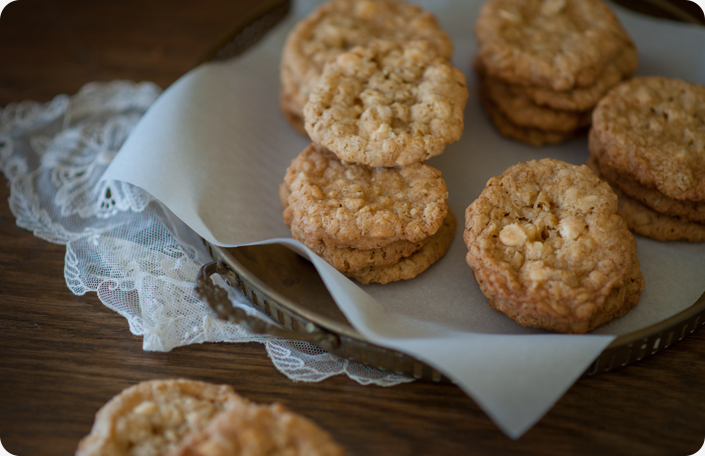 As I write this, a snow storm is blowing through Maine. I’m working from home today, sitting at the window, watching snow surround and pile upon my car in the street and I am staring down a vision of myself shoveling it out later today. She is staring back at me now, her face covered in snow and ice. She is mouthing, “Make cookies for when I am done with this please.” I am going to listen to her. After all, such judicious exercise deserves a treat like these crisp salted oatmeal white chocolate cookies, just one from all the delicious recipes for oat cookies. And if I eat one too many, who cares! 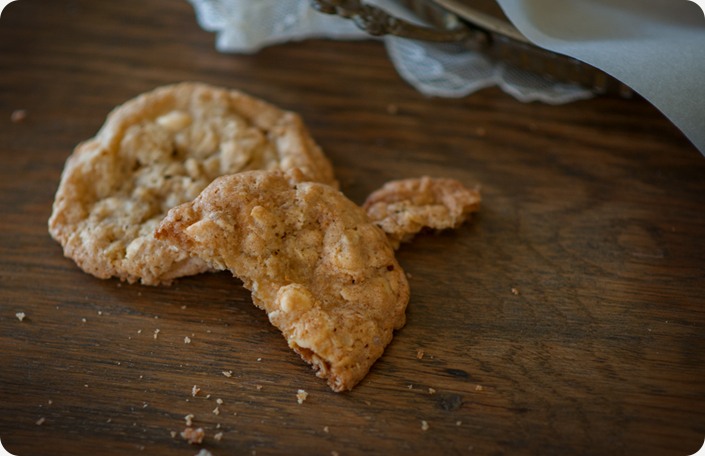 3. In a separate bowl, beat butter and sugars until light and fluffy. Scrape down bowl with rubber spatula.

4. Add egg and vanilla and beat until incorporated. Scrape down bowl again.

6. Divide dough into 24 equal portions, each about 2 tablespoons. Roll between palms into balls, then place on lined baking sheets and 2 and 1/2 inches apart. Using fingertips, gently press down each ball to about 3/4 inch thickness.

7. Sprinkle a flake or two of sea salt on each cookie.

8. Bake until cookies are deep golden brown, about 13 to 16 minutes, rotating baking sheet halfway through. Transfer baking sheet to wire rack to cool.