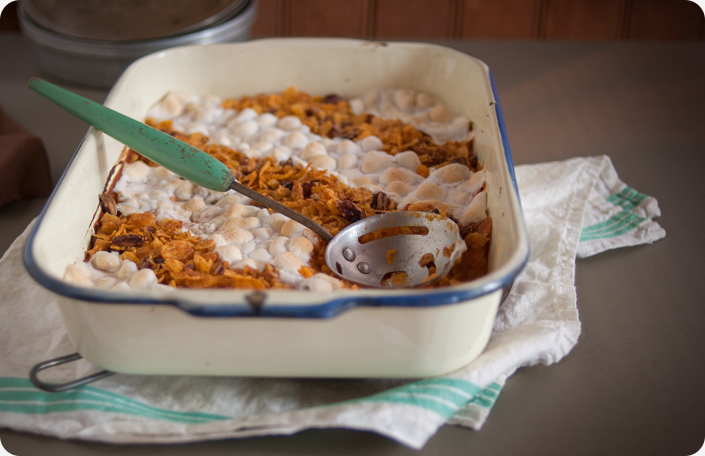 He looked up from his spot on the couch, their son asleep on his chest. “Do you need help?” he mouthed over Connor’s head. She smiled and shook her head.

Tomorrow, there would be twenty-seven people in their small house on Westport Lane. Bob’s family and her’s, together, with a few friends thrown in. Oh, and the Carltons from work. They’d had nowhere to go for the holiday and Ess could never resist offering when she heard such a thing. No one should be alone on Thanksgiving.

There was too much to do and only a few hours before she’d have to climb out of bed to tend to the turkey in the darkness of early morning. Connor’s toys were still strewn about the living room, the dining room table was only partially clear and the only thing Ess had managed to do ahead of time was bake a few pies and stash them in the freezer. She stepped into the dark kitchen and felt something in her breath catch.

This would be the first Thanksgiving without her mother.

Bob had asked her, just once, to reconsider her offer to host. “It’s too soon,” he’d said softly and she could see in his quiet eyes that he remembered them standing side by side, hip to hip, at the counter, tucked over their respective duties. Her mother was soft too, quiet but held the knife in her hand with an authority that could calm a quelling storm. She would never tell Ess what to do but would nod and gesture, tilt her head left and right and Ess would know what she needed. That other half of onion. A handful of parsley, chopped. The cubes of bread that sat in the red bowl on the table. A glass of water.

Ess felt frozen for a moment in the doorway. There was so much to do but now the thoughts, the worries, the frets, were drowned out by the memories of her mother. She felt paralyzed. Maybe Bob was right. It was too soon. In the pit of her stomach, the fear bloomed that she would always feel this way; that it would always feel too soon.

She felt a hand on her lower back, then, nudging her gently forward. She frowned and turned to scold Bob for pushing her but he was falling asleep on the couch with Connor’s head tucked under his chin.

Ess gripped the doorway that led to the kitchen, which once belonged, like the rest of the little house on Westport Lane, to her mother. There it was again, that pressure on her back. Ess took one step and then another. Her feet led her to the counter, filled with bags upon bags of unpacked groceries. Ess reached up with a trembling hand to touch the first bag, the cold cans within it, the bag of flour, the sweet potatoes, the canisters of cinnamon and cloves. The feeling that there was someone at her back had faded. But it hadn’t gone, simply moved, replaced by a similar sensation at her side, at her hip. The air beside her felt warm as if another body stood there, though she stood alone in the kitchen.

She unpacked the rest of the bags and set about her duties. It was only when she picked up the knife in her hand, felt it settle into her palm, that she felt the rest of her settle too, the calm and the quiet wrapping around her like a blanket. 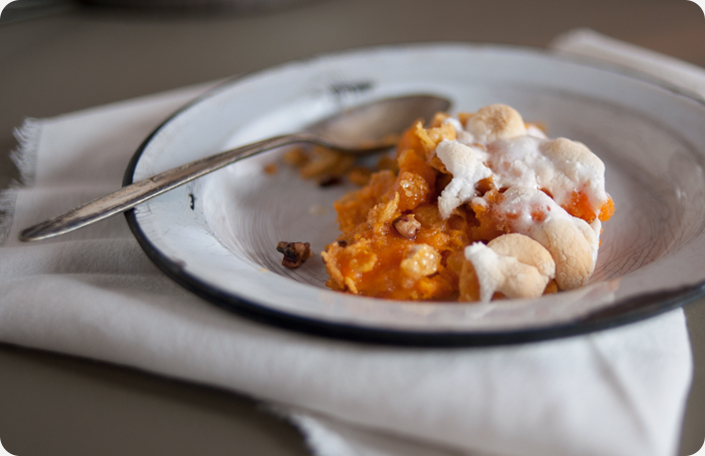 It feels almost silly to give you ideas for Thanksgiving.

Recipes for Thanksgiving have so much to do with people, more than the Food Network and magazines and blog posts. Everyone has favorite recipes, traditions, old stand-bys. Even if there’s a twist or two in the mix, it’s inevitably because of a person or a couple of persons who delight in trying new tastes at the table for the holiday, and possibly scandalizing Aunt Sue with a way to cook green beans that don’t have fried onions scattered over the top. Menus are crafted as much by the guests as they are by the host- what says Thanksgiving to them, what brings them the most comfort and joy to make and serve. And to eat.

We’ll be posting a few Thanksgiving recipes this month but I think instead of offering them up as suggestions (which, feel free if you’re looking for inspiration, that’s why we’re here) they should feel more like tributes. I hope you’re looking at these photos of Sweet Potato Casserole, strewn about with marshmallows and crunchy pecans, and remembering the first time you had such a concoction. Maybe you remember that moment you first took a bite, as a child, and reveled in just how sweet it was, that revelation of “This tastes like candy. I’m eating candy for dinner.” Or maybe you only saw it at the table as an adult, at someone’s else’s house, and it struck you suddenly that every table does Thanksgiving a little bit differently. And that’s okay as long (as long as the surprises involve more marshmallows and less turnips.) 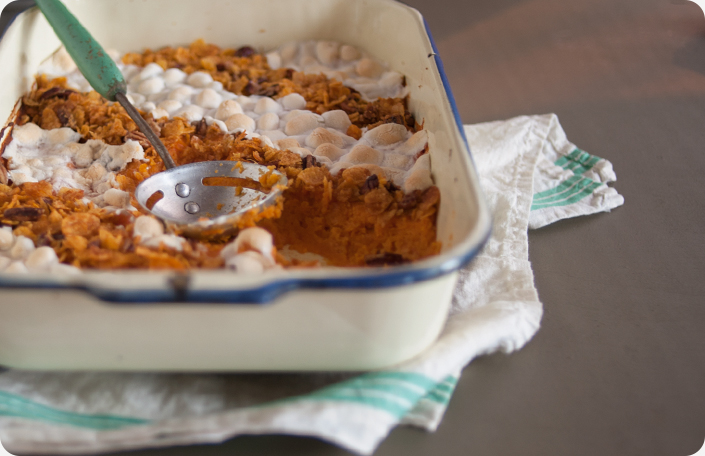 Note: You can half the sugar if you’d like and this dish will still be crazy delicious. – Nicole

3. Combine cornflakes cereal and next 3 ingredients in a small bowl. Sprinkle over casserole in diagonal rows 2 inches apart.