Lydie sat down at the stool behind the counter and then stood right back up again. She walked over to the window and moved the tiny, steel fire truck just an inch to the right. Now it stood gleaming and appeared to stare out onto the street, as if waiting for the next call.

That’s it. That’s all. She took a step back away from the window, her hands raised. Done. Done.

Her store was ready. It was gleaming and sat waiting, like her fire truck.  The counters were polished and shining. The floor was swept. The shelves and shelves (and shelves! who knew she would need so many shelves?) were filled with her wares, bright and clashing in color and height and perfect.Her friend Colleen, who owned the bakery next door, had surprised her with a tray of thinly sliced pieces of warm banana bread for her first customers, that now sat in the corner with a pitcher of ice water, lemon slices floating at the top.

Colleen had appeared in the teal blue doorway with the silver tray at dawn, just as the sun was making an appearance over the thatched roofs of their little commercial street and Lydie had almost cried over them, overwhelmed by the smell of the bread, feeling their warmth through the bottom of the tray, feeling the realness of this day, that it had arrived, hit her all at once like a wave.

Colleen hadn’t said a word. She’d wrapped her arms around Lydie and held her tight. She’d whispered, “Congratulations,” in her ear and then ducked out, smelling of bread and raisins.

Lydie was supposed to be opening the doors in just a few minutes and for someone who liked timing and schedules and the rigidity of knowing what happens when, she found herself with the strangest urge to delay it for just a few minutes longer. She wanted to just stand in the middle of the place and look. And look and look. Look what she had done. She wanted to look at everything, touch everything. She wanted longer to fuss and to polish. She held herself in. She turned around in a circle, once, twice. Then, she walked over to the door and slid back the lock. She turned the sign over in the window.

Last week, I went on a business trip for my new job.

You know how it is “on the road.” At one point, I ate a fistful of bran flakes and declared myself Winner of Healthy Breakfast Options. This is what the continental breakfast will do to a person who has been enslaved to the Weight Watchers point system for a full year.  And who maybe does not say no to after-dinner cake like she is supposed to but whatever, it was an official Maryland dessert, did you want me to be RUDE to the state of Maryland? (Can you guess the dessert? I’ll let it slip in our Facebook group later today but let’s see if East Coasters can guess. There is no crab involved, I swear. I’m not an animal.)

I also had the pleasure of traveling with a coworker who I am relieved to report is a DELIGHT THANK YOU GOD because I don’t think we left each other’s sight in forty-eight hours. By the end of the first day, I was conspiring on how I could secretly miniaturize her so I could keep her in my pocket always. By the end of the first day, she blurted out, “HOLY CRAP, you eat a lot of bananas.”

I had eaten, in fact, so many bananas over those two days that when I arrived home and saw two browning bananas on my counter, I let out a sigh that shook the whole of Maine to its core. Too bad there’s no good use for browned bananas or anything, right? Right.

Nicole, randomly, sent over this recipe a few days later. See how that works, people? That’s some serious synergy. 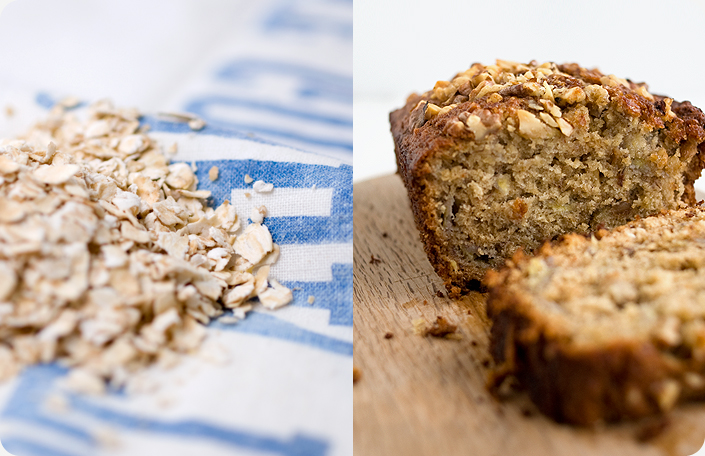 2. In a large mixing bowl or the bowl of a stand up mixer, add the mashed bananas, butter, honey, brown sugar, vanilla, eggs, baking soda, baking powder, cinnamon and salt.

3. Using the paddle attachment on medium speed, mix all the ingredients together, until they’re combined. (Might be a few banana lumps, don’t stress.)

4. With a wooden spoon, add the flour and oats until just combined. Do not overmix. Don’t make me come over there.

5. Add 3/4 cup of the chopped walnuts and fold in with wooden spoon. Again, with the overmixing- don’t do it. Resist!

6. Pour the batter into a loaf tin and sprinkle with leftover nuts.

8. Cool for a few minutes, then serve warm, preferably with a pat of butter or some cool cream cheese. A drizzle of honey would be good too.

Note: I bet adding chocolate chunks to this bread would make you super popular. Just saying.

Leave a Reply to Lynna H.