They heard the car first, of course.

Tom leaned back against the wall of his shop and put a finger in the air. “Hear that?” he said to his son.

Bobby was sixteen, had his hands full of grease while working on an engine that refused to turn over, and he rolled his eyes. “What?”

“That,” Tom said with his signature slow drawl, “is the sound of trouble.” Father and son looked up and over the porch rail as the antique car came roaring around the corner and down the road, though it was more like jerking and heaving down the road. They winced at the same time as the old jalopy chugged out a sinister puff of black smoke behind it. Puff, puff, croak, puff, boom.

Tom wasn’t surprised when the heap swerved toward his shop, sputtered and stopped. He shook his head and pushed the cap back on his head as the woman driving tumbled out of the front seat, the fashion plate next to her trying to be graceful even though her hair was sticking up and her sunglasses had a leaf stuck in them. “I told you not to drive this car anymore, woman,” Tom yelled out to her, over the engine’s roar.

They were like a cartoon- one tall, one squat. One in heels, the other tennis shoes. One shaking her head and looking regretful and the other tripping over her heels, looking ragged and like she was trying to slice him open with her eyes.

“Mr. Mulpepper,” the tall one said. She had on too much lipstick if Tom Mulpepper’s opinion counted for anything. She ripped the sunglasses off her face and glared, stumbling as she approached the porch. “I thought you were going to fix my car- not cut the breaks and put my life in mortal danger!” 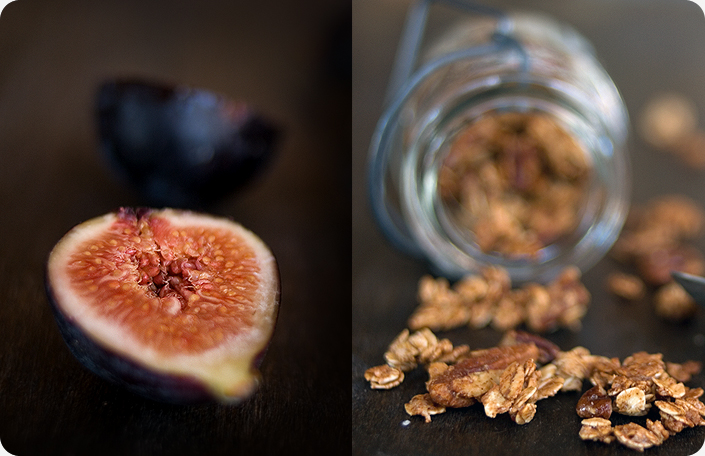 Tom crossed his arms over his barrel chest. “I fixed it fine.”

“You call this,” Sylvia Mathers hissed, waving her arms at her antique car, “fixed?” The car coughed. “I pity the poor souls who are driving around with children and small dogs in cars that you claim are fixed!”

“Woman,” he said, taking a step forward. As he expected, she recoiled from his grease-stained hands like he was on fire. “I told you it was not safe for driving. Not the way you drive it.”

“Hey!” The short woman said now. She put her hands on her hips.

“No offense, Aggie,” Tom said with a friendly wave. “It’s not your fault she’s always screamin’ ‘Step on it!’ in a car that’s not suited to go more than twenty miles per hour!” Sylvia narrowed her eyes at his high-pitched impression of her.

Sylvia glared and threw the keys at him. They hit Bobby in the shoulder. “If you weren’t the only mechanic for thirty miles, we would have words, sir. Gah, I can’t do this now. Aggie, my things! Let’s go!” And she turned and flounced off, aiming for the diner she owned across the street. “Move!”

Tom watched her go, a skinny mess in heels and a dress that was far too fancy for a regular Monday morning. He shook his head.

Bobby picked up the keys, they had a feather sewn into the key ring, and handed them up to his father. “You about done with your morning fun?” his son said wryly and Tom snatched the keys back.

“Don’t be a wise guy.” He sighed and looked at the old heap that was blocking his drive. It suddenly gave one last sputter and seemed to shudder, dark smoke billowing out from its hood. Not only that, it had disturbed the great tree behind it and a cascade of figs suddenly rained down, pelting the windshield.  “Great.” 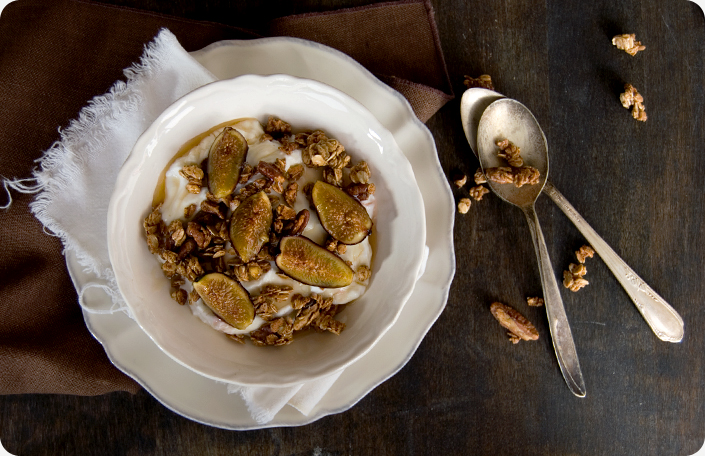 I have a special place in my heart for figs. Whenever I see them, they make me smile.

They remind me of one summer when I was living in Los Angeles- our friend Raj was staying with us for the summer and one day she came home with her hands full of figs, which I’d never eaten before in my life or even seen up close. When I asked her where she got them, she said she stole them from the tree in front of our neighbor’s place- our incredibly creepy and frightening neighbor who had an overgrown, wild garden in his front lawn (the kind that either says “I am a young Martha Stewart and I am making due with my incredibly inappropriate amount of front yard space” or “If you touch my precious gnomes, I am going to eat your skin, just fyi.” Neighbor’s place was the latter).  Raj shrugged. She had a long day and just wanted some damn figs. Oh, sweet, delicious contraband. 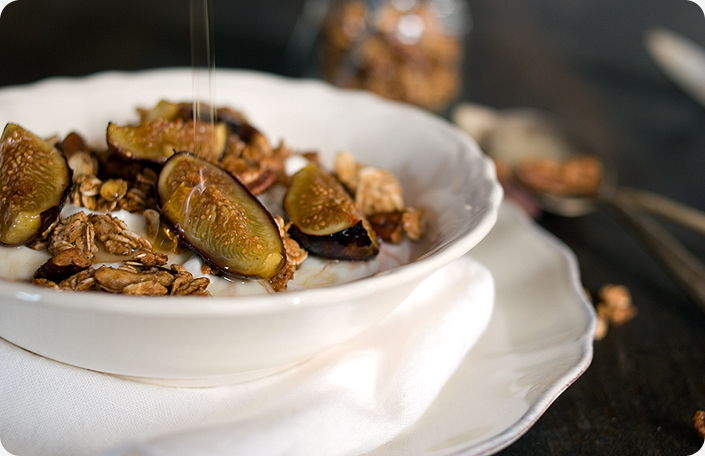 Honey-Scented Yogurt with Figs and Granola

[Note: Obviously, you can use store-bought granola here (cheater) or you can make my personal fave granola (I love you).]

Combine oats and pecans in a small bowl. Combine egg white and 1/8 teaspoon vanilla in a medium bowl; beat egg mixture with a mixer at medium speed until foamy. Fold oat mixture into egg white mixture.

Bake at 300° for 25 minutes, stirring once. Remove granola from oven; stir to loosen granola from foil. Cool on a wire rack.

Increase the oven temperature to 350°.

Combine 2 teaspoons honey and remaining 1 teaspoon vanilla in a large bowl, and add figs, stirring gently to coat the fruit.

Bake at 350° for 10 minutes or until juices begin to bubble.

Remove from oven, and cool completely. Combine the remaining 2 tablespoons honey and yogurt in a small bowl. Spoon 1/2 cup yogurt mixture into each of 6 bowls; top each serving with about 2 1/2 tablespoons granola and 6 fig quarters.

Leave a Reply to libby